It was a good night for me. I decided to fire up Poker Stars and play some Omaha online. I had about $160 left in my account from over a year ago, yes I have not played online in over a year. I was glad I had remembered my online name and the cash stayed in my account. I decided to give six handed, pot limit Omaha a try.
Hold'em online is way to tough. You have to be really patient and their are so many sharks that it is tough to make any money. It is a slow and painful game and I was never successful in the past, even with software that help me know who the sharks were.
On the other hand, Omaha has no such software and I think I have an edge. I still play tight and only the nuts. People are generally more loose, yet more tight when it comes to folding.. And lately, I have been doing well online. Let's see how it lasts. I had over $200 last night and got my account over $400 for the first time. I asked for a cash out and we'll see how it looks when I get a check. It will be my first time cashing out online.
After making my killing, I decided to head to the Retreat and play some round by round. I bought in for $200 and it was 2nd highest chip stack at the table. I played tight and lost to a short stack in holdem after he hit a set of 222s and I hit my King with AK. Shortly afterwards I got my money back from the same guy when I turned top set of 999s in Omaha. I think he had pocket Aces in the hole.

I hit another quad, 9999s in Omaha while in the small blind. I flop at set, the turn created a potential straight and I check it. The button pots it to $65 and I call. The river is the case 9 giving me quads. I push all in and he folds.. He said he had straight draw and flush draw... I think this is like the 4th time I have hit Quad nines..
In Hold'em I get pocket Aces in the Big Blind. Three people in front of me limp in and I raise to $45. Everyone folds except one short stack. He pushes all-in for another $15. I hit a set of Aces on the flop and he never shows.. German (Mike) comments, "and you still get action.." Knowing that when I raises it, I usually have the nuts and most people know this about me, yet I still get action.. I say, "It's because some people can't resist cracking me, even tough they know I have them beat.."
The very next hand I get pocket Queens. One guy raises it infront of me $17 and I re-raise to $45. This time everyone respects my raise and folds. The raiser folds, saying he had Jacks.. He also says that I only play 3 hands. Aces, Kinds and Queens.. Now that is respect, good fold!
Today marks 12 straight winning months for me.. I have not had a losing month in poker in over a year! There were some close months, but I still made some gains. Poker is tough to make money in. Alwasy believe that and quit while you are ahead... 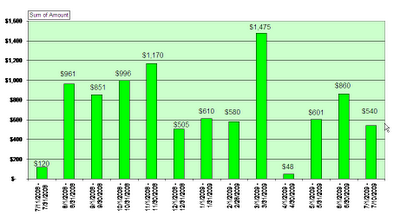