Well, it was a good final session of the year for me and a good start to the new year. It was a nice slow and steady climb, just how I like it. I called a few bluffs and made a few hands to slowly built my stack up. I never got involved with any large hands and before you knew it my stack was over $555. Nicole was running hot! and just kept felting everyone with her rags. Luckily, I was able to stay out of her way and she paid me off 3 out of 4 times we played together.
My New Year's Resolution is to Gamble less and play like a machine. This doesn't not mean no more Poker. It just means to avoid taking to many chances and long shots without proper pot odds. Many people equate Poker to gambling, but for me it's not gambling how I play. I like to say, I play with a slight edge ("only the nuts..") and like most casino table games, in the long run, I cant lose, because mathematically I am always ahead I will stay ahead in the long run.
Here are some stats and charts for my 2009 year in review:
Here is a chart by month. I managed to have just one losing month in November and the rest were profitable. My monthly average is right at $600/month. The way I see it, I make just enough to pay my rent or pay for my girl friend expenses.. I made a bit less in 2009 compared to 2008. My average in 2008 was $692/month, but I played more in 2008 when I lost my primary job for 2 months. 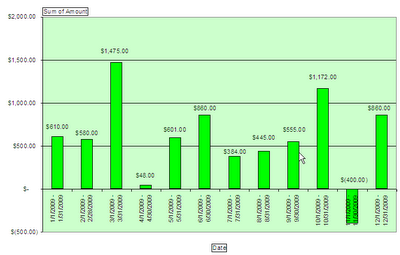 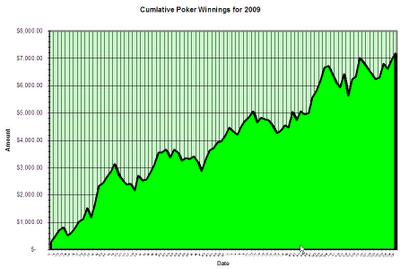 Here is a chart by location. In total, I played at 20 different locations. 13 of those locations were profitable and 7 locations were deposits for me, but nothing larger then $895. 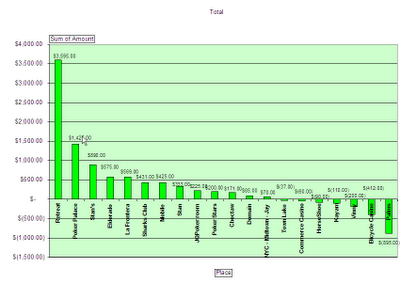