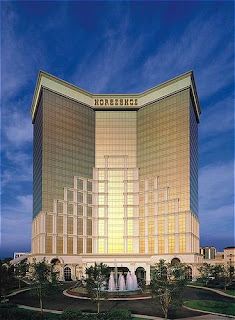 Took a last minute trip to Shreveport, LA this weekend. The Local poker action was shutdown so decided to check out the casinos in Louisiana. Me and Eric played at The Horseshoe. The action was loose and Casino packed.
All my big hands were during the first couple of hours. I had pocket Aces, Kings, Jacks and Queens. My Aces were cracked by Q10 when there was two 10s on the flop. I folded on the turn when it was obvious that he had trip 10s.
My Kings held up, but my Jacks ran into Aces both time. The first time I folded on the flop after the kid went all-in after min raising me. The second time I folded pre-flop after I raised it $20 and one short stack goes all-in and an old guy pushes all-in. The old guy had limped in at first, so I put him on a big pair and that is exactly what he had, Aces...
It was just one of those nights where I am the poor soul that has to fold the big pairs to a bigger pair. I am glad I was able to do it. Most people would have busted out much early then I.
I finally started getting a little lucky, hitting a set of 333s and then a set of 10s. I built my stack to $400 before another bad beat. I had A7 and flopped two pair with a flop of A79. One short stack guy goes all-in and another guy pushes on the flop. I push back and end up putting him all in. He had A10 and the short stack guy had A10. The turn is a 6 and the river an 8. They hit runner runner to make a straight! 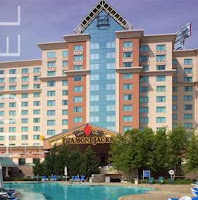 My stack was now down to $150. I called a guy down to the river who only had AK. The flop was two Queens and I had pocket nines. That built my stack back up to over $210. I was making my way back. Eric finally came over and gave me his bad beat story. Just like my story he flopped top two pair with KJ. A donkie called $700 with a flush draw 104 and hit runner runner strait! Eric was done for the night and I decided to wrap it up a short time later.
Current Stats
Posted by Anthony at 8:13 PM