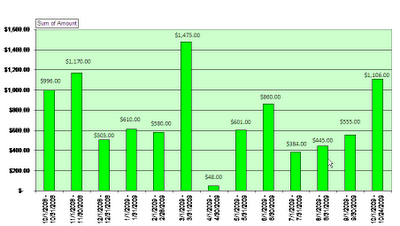 This month I just hit over $1000 in winnings. Its been 7 months since I did that and that was during my trip to Michigan where they forgot how I played. I have only had 2 other months where I was able to make over $1000 in one month. My average winnings per month, over the last 13 months is $718/month!
I decided to play Saturday night. Normally, if I make my $200/night goal on Friday night, I skip Saturday, but I just felt like playing. I am going to NYC this weekend, so I needed a little extra cash and I wont be playing this weekend. It is also expensive in the Big Apple, so some extra cash would be good.

Saturday night did not disappoint. I started taking down some small pots and slowly built up my stack. I only bought in for $150, thinking I didn't want to lose any more then that. My first big had was A♦A♥. I raise to $35 and everyone folds, except Nicole. The flop is J♥10♦ 5♦. Nicole checks and I push all in for $120. Nicole thinks for a while and finally calls. She shows like 8♥6♥. I look for a moment trying to see what I need to dodge and it's runner runner straight draw? Anyways, she does not hit anything and I take it down. Maybe she thought he had a flush draw?
I patiently wait for my next hand which comes about 1 hour later. I have pocket rockets again, A♣A♥! I haven't seen Aces in at least the last 2 sessions, so I knew I was over due. The table is really lose and I am in early position. Nicole calls a straddle for $5, so I raise to $40. German is right next to me and folds pocket 10s, almost with no hesitation. Mike, A.K.A. "Well Dressed," ponders his move. Mike has been gambling all night and looks like he wants to make a move. He finally pushes all-in $251 and says, "he wants to see Anthony gamble!.." Everyone else folds and I look at him, and say, "you really want to mess with me?" It's hard for me to gamble when I hold the nuts! If you are playing cards with me, then you are gambling... I call and show my Aces. Mike has A♠K♠ suited... The board is all rags, 9 high, and I take down the $500 pot!
This all happens within about 3 hrs and now my stack is over $700. This is way better then average for me. I continue to play some and donk off a few chips. I finally leave a bit past midnight, cashing out $640.
Current Stats
Posted by Anthony at 10:38 PM