Here are some stats and charts for my 2007 year in review: 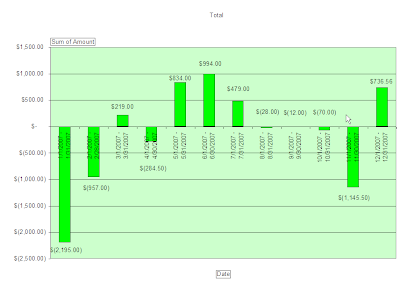 Here is a chart by month. I had seven losing months and five winnings months. My monthly average loss was -$119.12/month. It was a costly year in the beginning of 2007, but I managed a rebound towards mid year and ended with a total lost of $1429.44 January and February was a real bad month and costly learning experience. I played at the Detroit Casinos, and it was a hard lesson, but those players there are the best in the world. 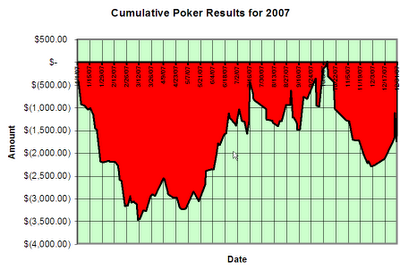 Here is a Cumulative Chart with each session in 2007 mapped out. In total, I played 124 sessions in 2007. That is about 1 in 2.87 days playing poker or about 34% of the days in 2007 playing the game. My average loss per session is about $11.53 per session. As you can see I lost allot early on learning the game. I was stuck at close to $3500. I made a good come back and even was profitable for one day. I only ended up with a total loss of $1429.44 for the year.
The lesson to learn here is that poker is a tough game to make money at and it takes a while to master.  Hopefully in the coming months and years I can improve my game and hack this thing before it breaks me....
Posted by Anthony at 8:18 PM No comments:

I just got back from another trip to Vegas. I usually go a couple times a year with my Uncle from Los Angeles. We stayed at Treasure Island. My Uncle is a high-roller and we get our rooms complimentary and food "comp-ed," as they say... Which means its all free. I just have to pay for a plane trip from Michigan to Vegas..

This trip was extra memorable. I got to see a few poker pros, Anna Wroblewski and Kathy Liebert. I was playing 1/2 no limit at The Venetian. When this girl sits down in the #1 seat. I am sitting in the #10 seat. I usually like to sit next to the dealer, either side, it doesn't matter. Most people don't like those seats because you cant see everyone, but I like it because most people don't see you either.

Anyways, this girl in the #1 seat is just yapping it up.. Talking to some guy sitting at another table (It turned out to be Allen Kessler and Kathy Liebert like they are old friends). I look at her and noticed that she looks very cute, young and familiar for some reason. I think to myself, that I know this girl from somewhere. She stares back at me with this long glare. She orders a big hamburger and only eats like 3 bites before finishing. She comments about trying to lose weight. I laugh inside, since she looks like she less then 100lbs.

I am playing my normal tight game. I don't play many hands. I only get involved with one hand with her, but everyone folded to my continuation bet. Eventually, the girl gets up to play in the daily Venetian tournament. After she leaves, I start talking with this guy next to me and he said that was Anna Wroblewski, the rising star in the poker community. I instantly remember seeing her on TV and having the commentators talk about her. I look her up on my phone and sure enough this girl won over $700K this year in tournament play.

I had my camera phone on me as asked her for a picture. She was really nice and seem so grateful. It turned out that she was just warming up for the big tournament by playing a little $1/$2 no limit. How many pros (that make over 6 figures) do that? I thought it was really cool that she could still play with us "little people..." Usually pros only play in the high stakes cash games and $1/$2 is really considered the bottom of the the poker ladder. Maybe 1/2 limit is lower...? Anyways, it turns out that Anna was only 21 years old and loved to play at the lower steaks for fun. She just became a poker star this year and is still grounded and down to earth. I think that is great!

After Anna busted out of the tournament, she came to me and told me all about it. I thought that was really awesome of her. She said she had pocket 88s and some guy called her all-in with pocket 44s and hit his set on the river. We all know these poker stories of someone hitting a 2 outer. Anyways, I thought it was really cool for her to chat with me about it, someone she just meet a few hours earlier. It really made my day...

After I got home to Michigan I looked her up on MySpace. There was already an imposer site on there, but I was able to find the right one. We exchanged emails, then Instant Messaged on AOL, then phone numbers. I watched her play a few times on Poker Stars and Full Tilt. We chatted allot and I learn allot about the life of a poker player. Now we are online friends and I am looking forward to my next trip to Vegas to see her again.
Posted by Anthony at 11:03 AM No comments:

This was my biggest day at Poker so far. I cashed out $882, my biggest one day session ever! I decided to play on my Birthday after witnessing someone else hitting everything on there birthday. The day did not disappoint. I went to Motor City Casino and played the $2/$5 game.
It was sick. I had pocket Aces a couple times, but every folded to my pre-flop raise. I floped the nut straight and someone flopped 2 pair. I had a set of 555s over a set of 222s. I boated with 53 with someone hitting the nut flush!
Posted by Anthony at 5:20 PM No comments: