This week I opened a Futures account with E*Trade.  With a  minimum account size of $10K, you get fairly cheap commissions for the first 3 months.  After that you can reduce the size to $2K, but I would not advise it.  Future's contracts are highly leveraged and you can quickly blow through a $2K account in minutes if you don't watch what you are doing.  I have watched on TastyTrade.com how its done have have read many articles about it.

Now was time to test the waters and why not.  I can commit last month's profits to this endeavor.  I dont want to lose money, but the key seems to be just chart watching and to be very discipline with your entries and exits.  Since a $10K account really wont cover many contracts, I will be strictly day-trading and closing all positions at the end of the day.

My first trade was the ES, short for E-mini S&P.  Since it was trading up and near a 5min Bollinger band I decided to try shorting 1 contract.  Well, it proceeded to pop up a few more ticks, but eventually came back to earth and I covered within 60 mins for a $37.50 profit.  Good thing I did, since it bounce back up again. 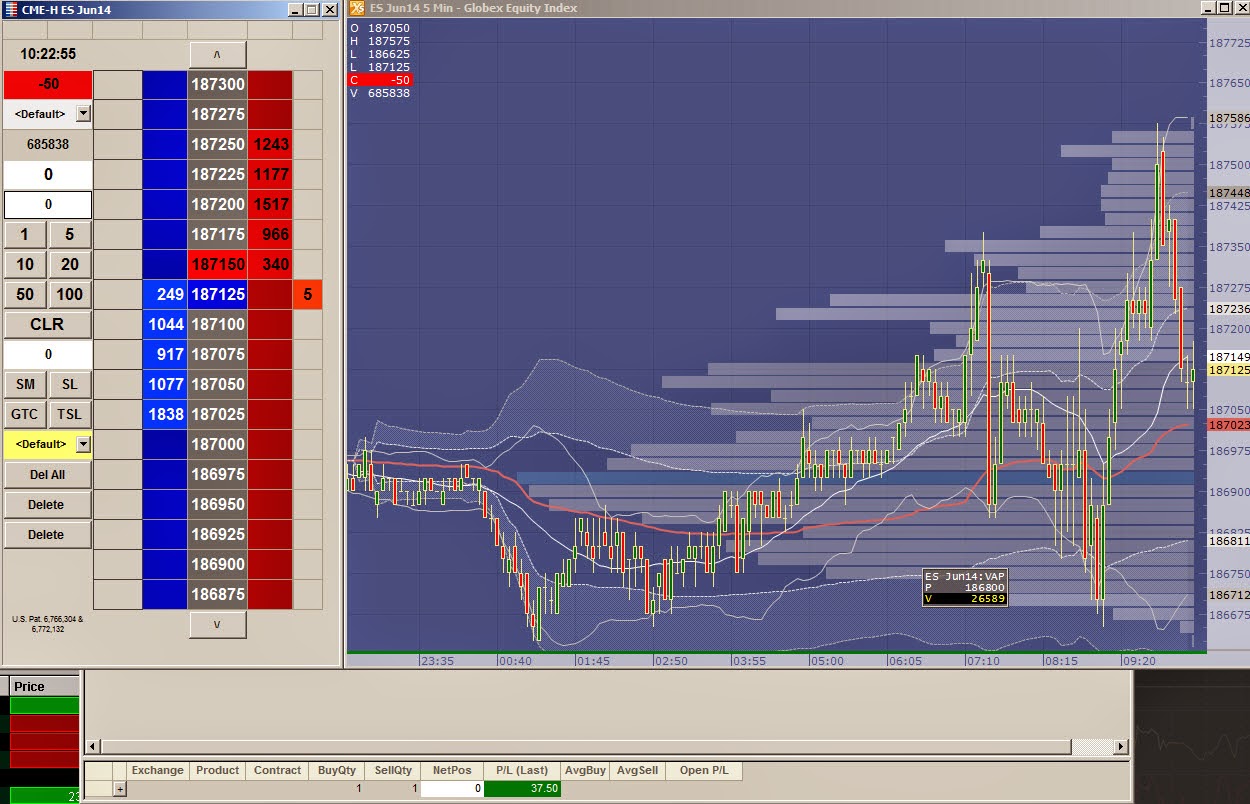 Next ,I tried a few NQ contracts, which is the Nasdaq 100 futures.  This future really moves fast, but I told myself I would not chase and would alwasy let the market come to me.  It was Fed meeting day so I was long 4 contracts during the Fed Release and the initial move was down, then a huge spike up.  I quickly made over $500.  I scapled a few more long trades on the NQ and at the end of the day I was up $937.50 for the day.  My futures account was up over 9% in one day!  Do that 10 days in a row and Ill be up over 100%

I had a realization today.  My desire to be a 'perfect' trader was holding me back.  I have had a  pretty good run the last 2 months, in trading.  Having no losses on any trades, I thought I finally cracked the markets.  I was trying to be perfect and did not want to lose any money on a single trade.  While I know this is unrealistic, I tried my hardest to achieve this because of my personal ego to always be right.

The problem with this is I had to take positions that had 'unlimited risk'.   It would only be a matter of time before a blow up.  As a good predictor of price action, I was simply lucky with my results so far.  I know I need to manage my risk, so it was time to try a new strategy.

I also wanted to build up my IRA accounts and in those accounts you can not enter into naked positions.  All trades need to be covered or cash secured.   So how can I build my retirement accounts?  I have to hedge every options bet and limit or define all unlimited losses.

I never like the idea of hedging my bets, since the cost of the hedges really eats into your profits, but what I realized is that without these hedges I am subject to huge potential losses and statistics say that it will eventually happen and be order of magnitude than many some gains.

So while the cost to hedge is high, the probability of profit is also high.  So I have to make up for the hedges by simply trading more and make up any losses in my volume of trades!  Sure, I statistically should lose 20% of the time, but the 80% of the time should be winners.  So my new saying is "Trade small and trade often!"

The 80% win rate should guarantee a profit at the end of the month, even with 20% losers.  The losses should be contained as long as you keep your trade sizes about the same.   The key is to maintain the same level of trading and don't over extend yourself.    As soon as you do, the market will go against you and you will have to start all over.  Stay disciplined!
Posted by Anthony at 11:04 PM No comments:

It has been a hell of a year to start my trading for 2014.  After incurring a net lost in January, I'm off to the races and have surpassed last year's gains at this time.  What is even better, is that I have been able to keep my accounts at all time highs.  Which means that I have been beating the markets, which is not easy to do.  Most professional money managers never beat the averages, but this year might be my year to do just that.

I am averaging $7,735/month and a win rate of 81%.    While my win rate is slightly lower than last year, my average per month is significantly better so far.  They say in trading even the worst stock picker can be a successful trader if they employ risk management and minimize losses.  So that is my goal this year. My goal this year is to minimize my losses and just be consistent.  My target profit is anything six figures.  If I could have contained my huge losses last year, it would have been an amazing year.  I had a few trades really blow up on me and that costed me dearly.  If I can manage to fix that, I should be well on my way. 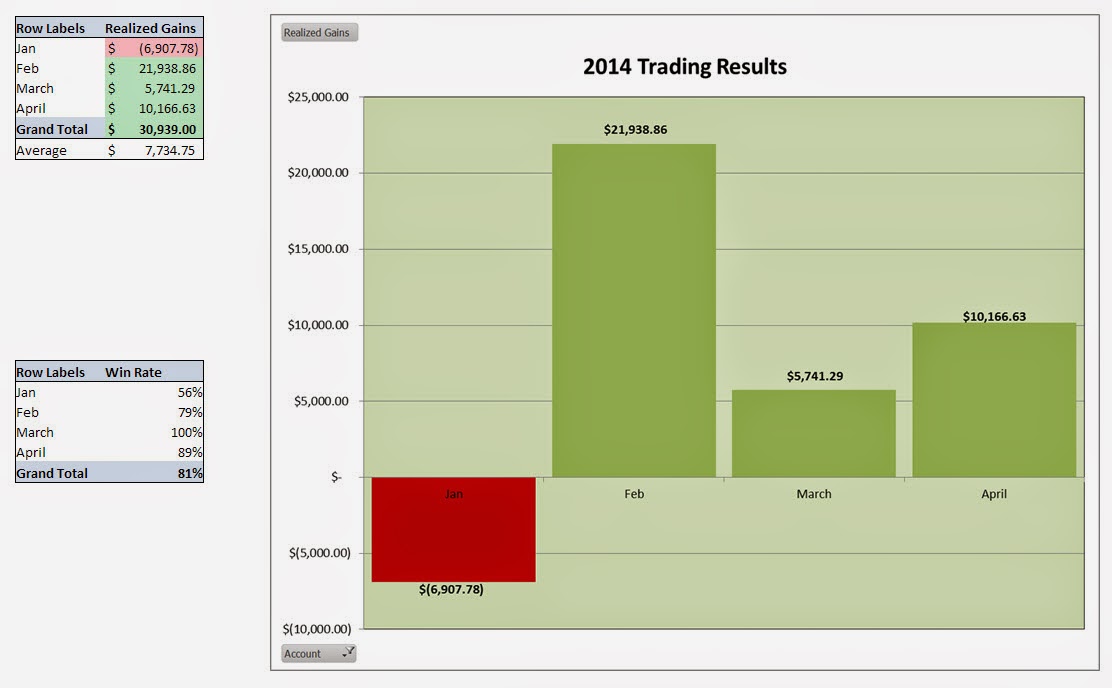 US Airway tweeted a picture of a naked female with a model 777 plane inserted in her vagina.  TMZ Live talks about the incident and why the employee isn't being fired.  I give my comments at the end of the show.  Warning while the original broadcast was edited for TV, the below video link contains the actual picture and may not be suitable for all views.  Viewer discretion is advised.

Is The Stock Market Rigged?

60 Minutes had a show about the stock market being rigged.  It Interviewed Michael Lewis and he discovered that High-frequency trading (HFT) were front running the market by using direct feeds to capture buy and sell orders from Exchanges and would buy or sell ahead of a large order, forcing anyone to have to pay higher for a stock, because the HFT purchased the supply a head of them.  CNBC had Lewis on there show a couple days later and here was the snippet.


The debate centers around direct feeds and the SIP, Securities Information Processor .  Apparently HFT have direct feeds to the major exchanges and they can see market order before anyone else.  Where everyone else only sees orders on the SIP, which is 'slightly' slower.  So using computers, a HFT algorithm can see your order come in via the direct feeds, then buy up all the ask and sell it back to you for a grantee profit.

So are the markets rigged?  I say no.  The slight speed advantage that the direct feeds have over the SIP system is measured in milliseconds.  For a retail investor, they don't care about your tiny lot orders to buy 100-500 shares.  The HFT is really trying to get ahead of the large lot orders that Mutual funds and pension funds have to transact.  The 5000-100,000 share orders, where a one cent profit means $50-$1000.  Do this a few hundred times a day and you made some real money!

So don't worry about the current news story of the week.  The market has never been better.  Spreads are smaller and commissions are lower. So its easy to make a profit then ever before.   It is still tough to trade and make a profit, but that is the trading business.  Don't blame it on the system, blame it on your self.  Once you figure out the system, then you can make money.  I'm living proof.  Problem is that once everyone else figures out the system, the system changes, so you better learn to change with it.

If you are still concern about someone front running your order, then just route your order on the IEX Exchange.  They add 350 microseconds of latency to HFT, by adding a huge spool of fiber in-front of there computers, so the HFT orders arrive at the same time.  The CEO claims that after he setup his own exchange, he found that he could hit any bid price and it would execute, where before the orders would just disappear.