One nice thing about a new house is that you get a chance to buy all the latest gadgets. When I first moved into my new house, I first got a 32" LCD/DVD combo TV for my bedroom. I got it with Time Warner Cable and that came with a High Definition DVR from Scientific American, the 8300HD for recording up to two shows at one. It automatically records program series and I can quickly fast forward through commercials.
I soon realized that I spent most of my time in my office, so I got a 19" LED TV. LED technology is the latest in TV design and the picture is amazing, claiming a 1,000,000 to 1 contrast ratio and uses very little energy, requiring only 12V to run. Now I needed a big TV for the main living room. So I got a 47" Insignia, LED TV from Best Buy. To play movies I decided to invest in a Blu-Ray player, since HD DVD is finally dead. 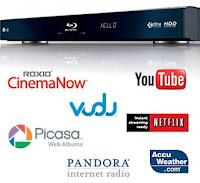 I got a LG BD590 Blu-Ray and DVD player from Amazon. This device is more then just a DVD player, it also has online streaming capability from Netflix, YouTube, Pandora and a host of other online streaming sites. It connects wirelessly to my Linksys router using WiFi (802.11g or n) and streams movies directly to my TV via HDMI cable. I got a free trial membership to Netflix and its amazing, plus I get one DVD in the mail too. I'll probably stay with Netflix service, since it is well worth the $8.99/month fee for unlimited streaming of movies. It works on my iPhone and also allows mutiple computers in my house to stream movies too.
Posted by Anthony at 9:57 AM No comments:

I got a new iPhone this weekend! Its been been about 3 years since Apple released the original iPhone and we are now in the forth forth generation of the iPhone. I did a bit of research on all the models and decided on get the 3rd generation phone called the 3Gs. The four models of the phone, in order, are the 2G, 3G, 3Gs and now the 4.
3Gs model: I decided to stick with last year's 3Gs phone because it is the best bang of the buck. It performs faster the the previous two models and the cellular service works the best of any iPhone model. People have complained about the iPhone 4 reception and their have been plenty of drop call reports on the iPhone 4. The 2G and 3G were simply just to slow to be very useful for any heavy Internet surfing.
The craigslist price on the 3Gs is between $250-$350. For the 2G or 3G models you can purchase for $80-$220. If you want a an iPhone 4, the prices are $500-800. You can always get a new iPhone that works only on ATT's network for $99 and with a 2-year contract. The monthly fees can be as low as $55 for very limited services (450mins, 200MS data, no texting). Average user should expect to pay $90 (900mins, 2GB of Data, 200 texts). For a totally unlimited service expect to pay $135/monthly (unlimited calling, data, text and tethering included). This would end up costing an average user $2260 to $3340 over a 2-year contract.
Simple Mobile: I decided to use Simple Mobile's network. There plans are $40, $50, and $60/month. All the plans are prepaid and all prices include all taxes and fees, with unlimited talk and texting. For a two year period the cost would only be $960-$1440, plus the cost of a GSM phone. The $50 plan has 100MB of Web and the $60 plan has unlimited Web. There is no long term contract and you can switch plans every month. Simple Mobile resells the T-mobile network, so they have the same 3G coverage as T-mobile, but is about 25% cheaper. You can use any T-mobile phone or any unlocked GSM phone. All iPhone sold in the USA are locked to ATT's network. To use an iPhone on another GSM network, like T-mobile or Simple Mobile, you need to first jailbreak the phone and then unlock the phone.
Jailbreaking: In the course of my research, I found out that not all software version of the iPhone can be jail broken and unlocked. To jailbreak an iPhone it must be on software version 4.0.1 or less (as of this writing 9-21-2010). Basically, just take your iPhone to http://jailbreakme.com and execute the script, it can take 30-60 minutes to complete. When it is finished you will get a message saying that Cydia has been added to the home screen of your iPhone. You are now running a jailbroken iPhone.
Unlocking iPhone: From here you can install the unlock software and use your iPhone on any GSM network in the world! Just click on Cydia: Manage: Sources: Edit: Add type in http://repo666.ultrasn0w.com
Once the source is added you will be able to find ‘ultrasnow 0.93′ in cydia which you will have to install by tapping on the ‘Install’ button which will download 48kb around of data and install it by downloading Mobile Substrate and then preparing it followed by reboot of the device.
Other helpful hacks: One you phone is at this state their are plenty of other hacks that you can perform. Just search the Internet to find more or click on this link. Here are some of my most useful hacks!
Posted by Anthony at 8:09 PM No comments:

Stock Index charts that show that the stock market always going up is total bull crap! Below are a couple example of the Dow Jones and S&P 500 charts over the past 50 and 100 years. 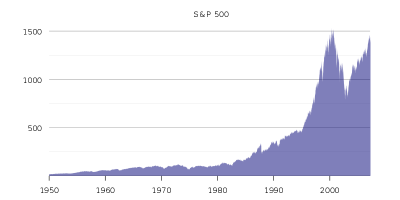 Looking at these charts you would think that yes, over any 20-30 years span the market always is trending upwards. But the truth of the matter, is that these charts don't show you what your portfolio would really look like, if you actually held onto all the original stocks. You would actually be broke.
Of the original 12 DOW Jones stock, only one is still in existence today. That is General Electric. All other companies have failed or merged into other companies. The components of the DJIA have changed 48 times in its 114 year history. The DJIA only has 30 stocks, so it has had over 160% turnover rate. So if anyone actually held onto the original 12 stocks, where do you think they would be today? Only holding GE stock, which is up over the last 50 years but flat for the past 15 years..
In June 8, 2009 GM and Citigroup were removed from the Dow average. Less then a year earlier, AIG, Chevron and Bank of America were replaced. Other companies that have been replaced include Kodak, International Paper, Goodyear, Sears, Bethlehem Steel, Woolworth, American Can, US Steel and Chrysler.
Imagine 20 years ago having a portfolio of Dow Stocks that had GM, Citigroup, AIG, Bank of America, Kodak, Sears and Chrysler? You would be broke now! The fact of the matter is that the current DJIA and S&P are actually just the a collection of the top 30 or top 500 stocks in the market to date. If a company gets to small or goes bankrupt, they just replace it with the next biggest, healthy and stable company.
So any historical chart of these indexes are really misleading. Instead of showing a chart of the original stocks over time. They are actually showing the top stocks of the market at that time, as as a company goes out of business, its replaced with a healthy company until that company goes out of business. The fact that it kinda goes up, over time, shows you the effect of inflation and an increase in money supply.
The truth of the matter is that if you hold onto any stock to long. The odds are it will look like Kodak's stock chart below. After an initial spurt of growth, it returns to zero. The lesson here is to play the upswings, but never stay invested to long... 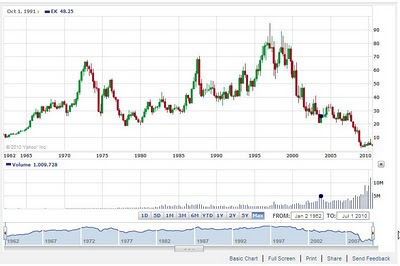 Posted by Anthony at 3:33 PM No comments: