My Confidence Building Back

It's been a wild month for me.  After starting out average, I decided to visit an old friend who got a new place for playing Poker.  I had a bad run of cards and when I started getting cards, people were cracking me with junk 2-pair hands.   Before I new it I had lost my entire month's winnings and then some.  I went on a Friday night heater hitting set after sets, getting my stack up to almost $1K, then proceeded to donkie it off in more suck outs and bad calls.  While I ended the night a winner, I still lost more then $600 from the top and felt terrible.  I should have just quit after making $700.  The next night was another losing sessions after a flush draw chaser cracked my AQ hand on a draw.  I had to commit my entire stack since I was ahead and he hit his flush and straight.
But last night I had my return.  The night started out with Hold'em and I was getting cards and callers.  I didn't make much money since most of the players knew when to fold.  I had KKs vs JJs.  Aces vs KQ and Kings again.  Everyone folded on the flop and I made about $50.  Everyone was playing pretty solid and unless a donkie showed up I didn't feel like I was going to make much this night.
The table decided to switch to Omaha.  Now, the action was heating up.  I went on an Omaha heater run and quickly went from $240 to over $700.  It's hard to remember any pivotal hands, since I played so many hands with Omaha.  But it seem like I couldn't lose for the longest time.  Here are some memorable moments.
Current Stats
Posted by Anthony at 8:35 PM No comments:

New Place, and The Case Ace...

There is a new Poker place in Austin, actually Round Rock and I gave it a try. It was the 2nd day and I haven't seen good cards in a while. I felt like it was my time to start seeing Aces and Kings again. 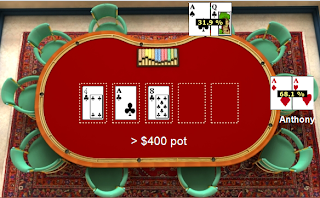 Pocket Aces and The Case Ace: My feeling was right. My first big had was pocket Kings, but everyone folded to my pre-flop raise. Then I have pocket Aces in the small blind. There is a $1o straddle and the button raises to $40. I re-raise to $100. The button just calls. The flop is an Ace with all clubs. I check, feeling he is aggressive and will push with a big Ace. He does indeed push all-in for my remaining $100. I call with my set of Aces. He shows me AQ with a Queen of Clubs.. A forth club does not hit and I double up to $400.  It was the case Ace that paid me off..
Pocket Kings again: Later in the night I get Kings again in early position. I raise $16. A really tight girl pushes all in for around $35. The host Dominic pushes all-in for $79. He is a loose player and so I call. He shows me an Ace and he said he had AK. The girl just had suited cards. Everyone misses the board and I take down another big $200 pot.
Current Stats
Posted by Anthony at 11:40 PM No comments:

Tip of the Month 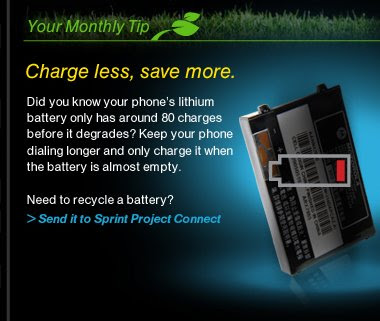 Posted by Anthony at 9:00 PM No comments:

When Obama was elected in 2008. The market sold off hard into the election down, Dow down 4500pts, when it seem he would win. After Obama actually won the election in November the Dow fell another 2000pts, less in a month, then recovering a bit before a final plunge of 3000pts since his election. The market finally bottom in March of 2009 and has been straight up since, defying all conventional wisdom.

It is because the herd thought Obama would be bad for the market and sold off before his election and then when he actually won the election, the final hold out sold everything, before having to climb back up. Since the market is always anticipatory, it will always do the opposite of what most people think. That is priceless advice after 25 years of trading! 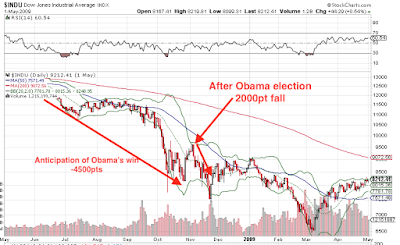 Posted by Anthony at 9:00 AM No comments: