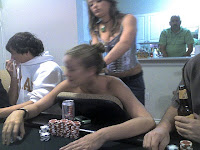 I played for 7 hours. I actually got my stack up to $400 within the first 1.5hr. Then, I was in reverse for 5 hrs, slowly donking off most of the winnings. I got back into the game when I hit a hand with Jessica. She is pictured right getting a massage from the new game girl "Jess". Both of which had some nice knockers.. Yes, her shirt is off and I had a very nice view. It looks like she is topless, but she really just undone her straps on her tank top. She was already wearing a skimpy little thing and it was a real distraction see her unstrap in front of me. Luckily, I don't get to distracted, but I told her I did. (You can see Stan in the background just drooling over the chicas... ha ha..)
.
I am actually a very discipline player and try very hard to never go on tilt. You can see that Jessica at that time had $400 in front of her. She got that when she hit Aces and another pushed her all-in with pocket nines. I saw another guy push all in with pocket fours. I told him to stop watching the girls. I told Jessica, see what you did to the poor guy. He pushed all-in with pocket fours, thinking that were Aces... These little comments go a long way to making people think about what you are thinking. Just remember everything you say and how it might be perceived. The most important mind aspect about poker is what you think the other player is thinking about you. If you can master that, then you have the edge.
.
Unfortunately, I made most of my money from Jessica. I cracked her Aces with a set of Jacks. She asked to check it down pre-flop and I got lucky to hit my set. If we didnt check it down, then she probably would have lost her stack to me. Later in the night I turn the nut straight with AK when she had two pair (AJ or A10 not sure.. she never showed). I didn't slow play her, but maybe she thought I was distracted by her boobs and was just going to give her my money. I really hated taking her money, since she is a super nice girl (in a bad girl kinda way), but I have to play my game and take my profits from whomever falls in my way. Sorry baby! better luck next time, it was other peoples money anyways on temporarily loan to you...
.
Current Stats
.
Posted by Anthony at 8:55 PM No comments:

Back in the saddle!

Got back onto the table last night. Took a little break last week. Had to entertain a lady friend. Isn't it just like a girl to ruin your normal game play? I should find a girl that plays poker, that would be sweet! Oh wait, I tried that and it didnt work out. Luckily, I was up big last week and didn't need to play for 2 weeks. I seem to do better anyways after taking a break and so far this month I am up over $900 again.
.
It was the Wednesday night before Thanksgiving and we played a little short handed. It seem like everyone was playing with scared money and it was mostly newer players that have not played me. It was slow and easy playing and no really big hands to get me into much trouble. It was slow steady climb. I bought in for $160. There was a $100 button bonus and I hit an Ace to get an extra $25. So I started with $185. It was a nice feeling to get some free money. Then I hit with AQ a couple times to build up. Everyone was chasing flushes and straights and I made them pay. Luckily, they didn't hit and I took down pots without having to show much. Made $220 total. 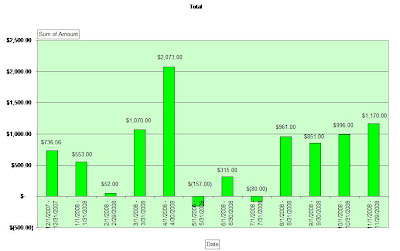 Above is a chart by month of my current statistics, not bad if I do say so myself...

Current Stats
Posted by Anthony at 4:10 PM No comments:

Solid night, but no big hands?

Back from a solid night of Poker. I played for about 4.5hrs and made $400. What is unusual about tonight was that I had no real big hands, or no really large pots and just a few showdowns. I just played solid and people folded. I built my stack up a little at a time. I did hit with a suited connector, 78 early on with some guy betting $50 into my nut straight. Luckily, for him he was smart enough to fold to my all-in bet. Pocket nines were still hot for me. I turned a set of nines and rivered a boat. The flop was all hearts and I had one guy chasing the nut flush to pay me off somewhat. I had AK once in the small blind and raised $20 preflop, I had 5 callers! Luckily, I hit my Ace on the flop and everyone folded to my continuation bet.

The table I was playing had some familiar faces. German, Melvin, Eagle Eye and the always gorgeous dealer, Jessica. BTW, Jessica reminds me of Nicki on HBO's Big Love. She is played by Chloë Sevigny. She has a girl next door look and every time I see her I think of Nicki on the show. What do you think. Does Jessica look like Nicki?
.
Anyways, as I sit down German says, "Hello, Anthony." I say, "Do I know you?" German says, "You know me, you are the tightest Asian player in Austin." I tell him, "Don't scare away my action." Jessica, the dealer, confirms German's comment to the rest of the table. I haven't seen German in a few weeks. I guess he has been running badly and lost a ton of money to Billy, a really loose player. I saw Billy take German down for about $500 one night. I generally don't like to socialize to much at the Poker table. Poker is a tough game and any edge that you have you need to exploit. Even the smallest of advantages will pay big dividends in the course of hours of play. So now everyone at the table knows my reputation. I need to consider this in my play. They now know I am super tight and the fact that another solid player told them this is information that they will try to use against me. Unless of course, I know they know this and I use it against them, ha ha...
.
Anyways, I think in my first big hand I had a guy that bought in for $500 and tried to buy my pot. I had 78 suited in hearts. I limped in. This guy limped in under the gun and then tried to raise the pot after the big blind just called. He had to take back his bet, but it was a suspicious move. Anyways, the flop is A56. Everyone checks, including me. The turn is a King. It's checked to me and I bet $10. The under the gun guy reraises me to $35. I call with my open ender. The river is a nine, I hit! The guy comes out betting $50 into my nuts. I have $150 in front of me and push all-in hoping he slow played a set of Kings or Aces? The guy thinks for a while, and folds. How can he bet $50 and just not call, unless he had nothing and was trying to buy the pot against the "tightest Asian player in Austin". Most people cant fold a set, even to the tightest Asian player in Austin, can they?
.
This night makes me ask myself, why was I successful? I made more money then average, but I didn't get involved with to many big pots. I just took down many middle sized pots to people who folded to me. I think it came down to image and respect. Everyone heard that I was tight. The dealer confirm this to everyone and another player confirmed it to the table when I hit quads last Friday. I think the best image to have at the table is a super tight aggressive. Someone that waits for hands and then plays any hands like the nuts. Allot of people argue that they rather show people that they are loose and hope to double up on someone that makes a loose call to them. I find this strategy very risky. Because people will always try to crack you, because they never believe you. Sure every now and then you can get up big, but it's a losing strategy in the long run, I am convinced of that. Its always better to be respected and have people fold to you, then be disresepected and have people river you.
.
This makes 10 straight winning sessions in a row. I guess I am on a multi-month heater! I will take it. Its nice to just slowly make a few bucks and have some fun.
.
Current Stats
.
Posted by Anthony at 2:17 AM 1 comment: 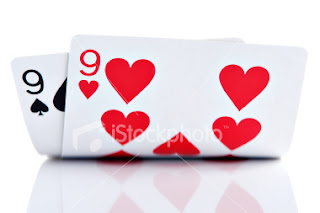 I'm home again from another successful night of poker. It was a fun night. I never got down to much and hit some hands when I needed to. I bought in for $200 and cashed out for $550. My stack high was $600 and I just couldn't break thru it so I quit after 8.5hrs of play.
I hit a nut flush on a river to suck out on someone with 2 pair and got up to $300. My big hand was pocket nines. I pre-flop raised $12 and got 4 callers. The flop was 998. I could hardly believe it. I flopped quads again! The odds of flopping quads with a pocket pair is 1 in 407, a very rare event which i have done a few times. I checked the flop and a loose guy bet $2. After 2 callers I re-raised to $5. Everyone called. The turn was a 10. Everyone checked around. The river was a 7 and now 3 spades for a potential flush. A really lose guy bets $20. I re-raise to $60. Another guy behind me calls and the initial raiser calls. He says my flush is good. I say, "no but I have the nuts". They say, "you got a boat" and I show my quads and take down a pot over $250. Someone says, "you meant you had the nuts, nuts..." I guess no one ever excepts someone to hit quads. But if you play with me, you will know that I hit quads once a month. I just hit quad queens a few weeks ago, so I am running strong and haven't loss on a Friday night in 2 months..
Current Stats
.
Posted by Anthony at 4:48 AM No comments: