Here are some stats and charts for my 2008 year in review: 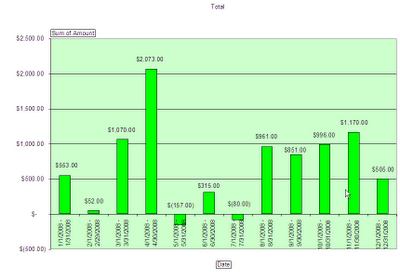 Here is a chart by month. I managed to have just two minor losing month in May and July, the rest were profitable. My monthly average is $692/month. It was a profitable year compared to 2007 where I lost $1429.44 My average in 2007 was a loss of -$120/month, so this year was pivotal as a poker player beginning to make more money then lose more money. 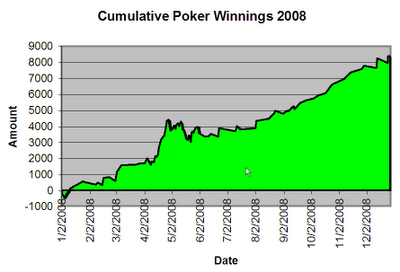 Posted by Anthony at 2:36 AM No comments: 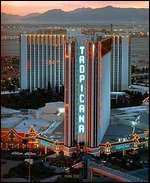 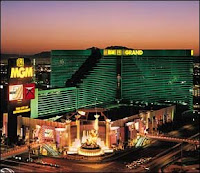 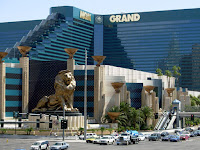 On my last day, I had a 2:30pm flight. So I decided to play some poker before I left for the Airport. I played at the MGM since its a short walk from the Tropicana. I only played for 1.5hrs but made about $45. During my last hand I had pocket 88s and hit my set on the flop! No action, since it was top set and the other guys had nothing. Then right afterwards I get pocket 33s. So I have to play this. I hit my set again! The flop was 37j. I bet $15 and I get one caller. The turn is a King. I bet $50 and he calls again. The river is another King, I just filled up! I bet $75 and the guy folds!
.
Everything said, I only made about $150 for the trip. It was fun and I should have quit early the first night. And then just played the second night and it would have been a really good trip. But as with any form of fun, its good not to lose any money.
.
Current Stats
.
Posted by Anthony at 6:28 PM No comments:

I flew back to Austin on Saturday. The weather was in the 70s and I was glad to leave the cold behind in Michigan. I got in around 4pm and went home to unpack and rest a bit. I decided to play some poker at a new place in South Austin. The place is hosted by the same guys where I had been playing on Friday night. I haven't had to play in their Saturday for some time since I kept hitting my weekly goals on Friday night. But, now I have a loss and break even session behind me, I can get back to winning some cash!
Saturday night did not disappoint me. It was my biggest winning session in over one year. I cashed out for an even $800. I started with $200 and hit an Ace for the button bonus for another $20 in free cash. I haven't made over $600 in one night since my birthday 1.5 years ago. That night I made over $840 in a $2/$5 game in Motor City Casino.

I built my stack up fast! The second hand of the night I have pocket Aces under-the-gun. I raise to $20. One girl calls and everyone else folds. I put her on a big pair, Jacks or Queens. I have never played with most of these people so I have to go with my gut, girls generally play pretty tight and wont call a $20 raise with anything, but a big pair. The flop is all rags, nine high. I bet out $35. The girl calls! Now, I know she has an over pair. The turn is another rag, a 6. I bet $40. The girls announces that it will be a short night for her and calls again. The river is a 10 and I decided to check. She also checks and I show my Aces and she folds.. I see paint under her cards and pretty sure she had Jacks or Queens.. Now, I am up to $300.

.
The very next hand I have pocket Queens in the Big Blind! A maniac raises it to $12. I have never played with this guy, but the very first hand he raised it to $12 so I profile him as a maniac raiser that likes to play many hands. The girl that I just took down for $100 also calls. I decided to raise to $47, all day. The maniac calls and the girl folds. The flop is 683. I bet out $50. The maniac calls! The turn is a King. So I check. The maniac checks. The river is a 9 of clubs and now there is a possibility of a flush. So I check. The maniac bets $100.  I have decision to make. A king beats me, but he checked it. A flush beats me, but do I believe him, he is a maniac and probably likes to push on weakness? I have to go with my instincts, I decided to call! He says, "six". I think pocket sixes for a set.. No, he just one pair of sixes. I show my pocket Queens and take down the $370 pot. Now, I am up to over $500! A girl says, "Wow, pocket Aces then pocket Queens.." Sometimes you never know when your hands come. They can come early, they can come late.
. 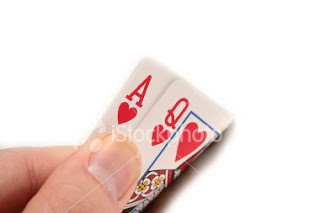 Shortly later, my final big hand of the night. Zane, a guy that I played with before and who likes to straddle allot raises to $15. I am directly to his left and I have AQ, I decide to call. Everyone else folds. The flop is A7Q, I just hit 2 pair. Zane checks and I bet out $25. Zane smooth calls me. The turn is another Queen! I just boated up. Zane now bets $50. I think for a moment, does he have pocket Aces? I decide to just call. The river is a rag. Zane now bets $75. I think of a moment and decide that he cant have pocket Aces. I have Queens full so the odds are pretty small, he probably has AK. So I decide to re-raise him to $150. He thinks really hard and actually shows me his hand. He says, "I have a good hand.." and shows me.. He did have AK... and decides that he is pot committed and has to call! I show my Queens full and take down the $480 pot! Now, I my stack is over $700 and I am the chip stack leader.
.
I continue to just play solid poker and build my stack up to over $800. I eventually come back down losing a few dollars and cash out for exactly $800.
.
Current Stats
Posted by Anthony at 8:53 PM No comments:

Quads twice and I still loss?

I only had a chance to play poker on Friday night. It was a tough night at Palace Poker. I had some big hands. Pocket Aces once, no action. Pocket Queens like 4 times and cracked 3 time, someone hitting a set and trips on me. I did hit quads twice, 7777 and 9999! But had little action on it. I should have cleaned up, but got short stacked after losing $100 with my pocket Queens. The Palace had a prize pool for the top 3 hands of the night. My Quads didn't even make it, since you needed both cards to play and by 1am there were 3 straight flushes... Damn, those are some big hands..
.
I did suck out on one guy that is worth mentioning. I was in the small blind and short stacked at about $45. I had 94. Everyone limped in. The flop is 939. I check hoping that someone would bluff at it. The button bets $15 and I go all-in. He instant calls my $45 all-in. I asked if he had a flush draw. He said no and shows pocket 33s. He flopped a boat! Damn I am screwed. I think I need to hit a 4 or runner runner pair. Well the turn is a 7 and I think its over for me. The river is a 9!! I hit quads for the second time that night! It was sick!
.
I should have re-buy earlier. I should never had let myself get so low. The guy would have called my all-in and I would have been up for the night. You never know when you hit your hand and you better have money when you do. Sometimes to win big, you have to win from behind. Its sad, bit sometimes its the only way. This is the second time I hit quads on someone after the board trips up. The other lesson to the story is never slow play bottom boat! Even though it seems like a strong hand, you never know what the river will bring. You play it hard and you play it fast!
.
At the end of the night, I had loss $134. Not to bad, all things considered. The table was super tight and all regulars that remember me and hardly ever gave me action. I had to lose sometime, I am glad it was a small amount.
.
Current Stats
Posted by Anthony at 2:46 AM No comments:

I finally didn't win, but I didn't lose either. I broke even. After getting up to $300, I donked off my winnings and left with what I started with $200. I consider that better then losing. You cant always win at this game and if you can minimize your losses then you should come out a head. I am headed to Michigan next week and will try playing at my old place, Palace Poker in Flint, Michigan.
Posted by Anthony at 11:36 PM No comments: