Best Session of the Year

Its been a rough Poker year for me. Lots of bad beats and suck outs early in the year. I kept to my game and feel like Im finally back now. I have 3 winning months in a row, but still a little down for the year. I dont know where the year really went, but hopefully the second half of the year will be back to more normal games.
I felt I couldnt lose early on. My first hand in the big blind I had 83 and flopped a boat with a flop of 338. No real action, but its nice to get lucky sometime. I started noticing people playing any 3. Doty called a big raise with 3♣4♣ and rivered 2 pair to crack pocket kings!
I started playing on the second table and took down four people's entire stack. My first victim was a loose Asian guy. I have A♣Q♣ and spike an Ace on the flop. He calls me down to the river and never shows. I figured he had Ace rag. Then my very next hand I have pocket 10♥10♠. The same guy pushes over the top of my raise and shows A♦5♦. I take all his chips!
I felt another guy with A♠K♠. Everyone limps around and I have A♠K♠ in the small blind. The flop comes Q♠8♦3♠. One guy bets $10 and another re-raises to $25. I smooth call with my nut flush draw. The turn is a 10♥ and he bets another $31. I call again. The river is a J♦ making my nut straight. I push him all in for his remaining $40. He shows top set of Q♦Q♣s! I dodged a bullet there! Sometimes its better to be lucky then good.

A few minutes later I have pocket A♥A♣ under the gun. Doty calls and another guy pushes all-in. I call and Doty calls. The guy shows A♦K♠ and Doty never shows. I spike my set on the flop! and take both their stacks!
I move to the main table and get pocket K♣K♦, A♦A♥ and Q♣Q♠. They all hold up each time. It's nice when the odds work out in your favor. Its just a matter to time before it catches up with me. I am up over $400 in about 5 hours. That is $80/hr and better then average. I decide to leave a little after midnight.
Poker Stats
Posted by Anthony at 1:48 AM No comments:

My Lexus In The Shop 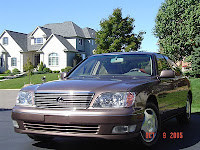 I took my Lexus LS400 into the shop on Friday. I had the check engine light turn on and a number of other minor issues I wanted to them to take a look at. My windshield mister motor was dead, my center brake light had a couple of bulbs out and my AC would blow warm during stops. My air conditioning issues was due to a relay that failed. 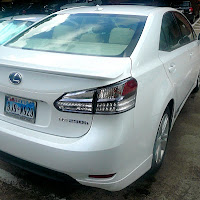 Going to a Lexus service station is an experience in awesome customer service. All of the service area has flat screen TVs, leather furniture, free drinks and even Apple computers. They even will give you a free car to drive until your car is fixed. For all this, you do pay for it.
They charged me about $100 for all the parts and $350 for labor. They didn't have the parts in stock so I had to come back 4 days later. Fortunately, they gave me a 2010 HS 250h hybrid loner car use while my car was in the shop.
This car was sweet and one of the most technologically advanced cars I have ever driven! Not only is it a hybrid getting 35MPG, it has a rear view backup camera and voice activated navigation system. To start the car you push a button. The car actually unlocks automatically when you get close to the car.
Check out the video below of me backing out of my garage and the back-up camera. My previous company actually makes backup cameras, so it was nice to see one in action.