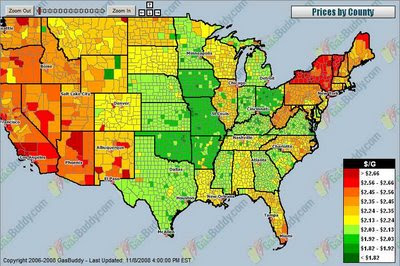 I filled up my tank today at the lowest priced gas station in Texas, maybe the United States at a small town called Taylor. Regular unleaded was going for $1.89/ gallon. I thought I would never see prices this low again. I use an online search site to the lowest prices. Below are a few links by cities where I am from.

For anywhere in the USA --> http://gasbuddy.com/

And for my unfornate family that lives in NY you have the higest gas prices anywhere. Check out ---> http://www.rochestergasprices.com/

Posted by Anthony at 7:26 PM No comments:

What a sick night! Set over set.. boat over boat!!! Luckily I was on the high end of both of my set over set and boat over boat. It was just one of those nights and where I didn't play many hands but maximized the few hands (3 big hands) that I did play. I cashed out over $700 and started with $160.
My first 2 hours were fairly uneventful. I did get pocket kings twice. The first time I raised

The hand of the night: I am in the big blind and look at pocket Queens. A loose guy raises it $7 and two people behind him call including the big stack with over $800 in front of him. I re-raise another $20 to $27. I get 3 callers! Stan the host calls and says, "Just what you wanted.." I say "Not really, I would rather just have one caller.." thinking that the odds increase of someone hitting there set with more callers. The flop is Q7K. I hit my set of Queens! I bet $50. The original raiser thinks about calling and starts counting his chips. He eventually folds, putting me on AK or Aces. The button, who is also the big stack, re-raises me another $100 on top. I am not sure what he has. Maybe AK and he is trying to push his big stack. I immediately re-raise him all-in. I have $230 in front of me. The big stack instant calls and now I wonder if he has pocket kings, the only hand that beats me... He rolls over pocket 77s, he hit bottom set!!!! The river actually pairs the board with another king and its boat over boat. I take down the $650 pot and am now the new chip leader at the table!
.
The Big Blind Special: A few minutes later I am in the Big Blind again. Just a few limpers and I have 63. I am hoping for lightening in a bottle. The flop is 664. I hit trips. I don't really like my 3 kicker but I bet out $10 into a $8 pot. A fairly tight girl calls and the former big stack re-raises me to $35. I call the extra $15 and the girl calls. The turn is a low card like a 7, but now there are 3 hearts and a potential flush. I check and the girl checks. The former big stack bets $35. I don't put him on a flush so I call and the girl calls. The river is a 3! I just filled-up. I don't believe it, but I can get a big blind special every now and then. I decided to bet $100 into a pot over $200. The girl folds and the former big stack calls asking if I have a boat? I say yes... He shows pocket 44s. He flopped a boat and I river a bigger boat, sick!!!! I take down the $400 pot and now have over $800 in front of me... I am not sure why he didn't re-raise me. He flopped a boat! yet just calls my river bet! What did he put me on? There are only a few hands that beat him, yet he takes the conservative route and just calls. This tells me that he respects my play and is a solid player.
.
If you don't respect my play, then you just are not paying attention. Maybe losing the previous huge pot to me put the fear of God in him. He said early on to me that he wasn't going to play any pots that I raised. He noticed that I didn't play many hands. He should have taken his own advice and stayed out of my pots. He would have been up over $1k if he just didn't play in the 3 pots that he played with me. I generally do put the fear of God in most poker players. You just don't want to play a guy that only plays one hand every 2 hrs... lol.... The dealer, Sterling called me the "Silent Assassin..." Noticing that I don't talk much, but when I do play they generally don't see me coming. The dealer said that he was afraid of me, even tough he was just dealing... If you want a good image at the poker table, don't talk much, play tight and only show sets. If that doesn't scare them, then take there money.
.
Current Stats
.
.
Posted by Anthony at 6:26 PM No comments:

Another successful night. It was a long 12hr+ session. I didn't quit at my high point, but I did quit a winner at $110. My high was $250 up, but just couldn't quit... Ahhh, what is wrong with me.. I should know that whenever I get up over $200 I should quit.. Anyways, it was fun and I keep my winning streak alive. I had to risk my entire stack chasing a nut flush draw. It was against a lady. She raised it $17. She played tight and I put her on a big pair. I was in the big blind with AK suited in clubs. The flop is Q23 with 2 clubs. I check. One guy bets $15 and the lady re-riases to $60. I put her on a set of Queens. I have a draw and about $100 in front of me.. I haven't played in 2 hrs.. I have to hit to win, without pairing the board.. I don't usually make this kind of call, but wasn't hitting anything all night. So I call... This scares the previous better and he folds. The turn is a 7 of hearts. I check and the lady puts me all in. I only have about $35 left and am pot committed, so I call. She turns over a set of Queens and I show my nut draw. The river is a 10 of clubs! I take down a $300 pot! I feel bad for taking out her set. I know she is a solid player and would rather take chips from a weak player, but sometimes you gotta gamble... From then on I built it up another $150 before giving it all back. We played a little Omaha and I leave up $105..

I played last night for 8 hrs. My total profits? $5.. A minor success since I was never up more then $50 and got down to around $90. I did hit a set of 33s early on and a set of 22s, but didn't get paid off. If I would have called a $12 raise with 22s I would have hit another set. The flop was A23 and the guy that raised had Ace something. Normally I would call, but just wasn't feeling it in the small blind. I had Aces once in the big blind and the button re-raised to $60. I went all in with around $85. Another guy called and the button guy called, he had pocket Kings, but my Aces held up. I doubled up with pocket Queens when a loose guy went all in on a rag flop. He had pocket 10s. Not sure why I couldn't build my stack, since the table was very loose. I guess it was just one of those nights. I did lose $75 in one hand when I had pocket Queens and an Ace hit the flop. I bet $50 on the flop and had a caller. I checked the turn and he bet $100 on the river. Sometimes you just gotta fold those big pairs..
Posted by Anthony at 2:24 PM 1 comment:

Back from a relatively short night of Poker at Sheldon's. I made $240 in about 3 hours. I played from 8pm to 11pm. I figured I was averaging $80/hour in a very steady climb up. I bluffed one big hand to make it a good night early so I decided to call it a night and get some needed rest. Pocket Queens was the hand of the night. I had them 3 times, along with pocket Kings once, Jacks twice and Aces one. That's a lucky streak to get those big hands within 3 hrs.
I hit Quad Queens in my first big hand. I look down, under the gun, "two ladies". I raise $15, haven't played a hand since they started for 25 minutes. The guy in the big blind calls and he ask if I want to run it out. I don't like to do that, but want to be friendly so agree. The flop is AQ3, I say I have a set, turn is a Queen, then I say, "now quads" the river doesn't matter. The guy shows pocket 88s. He probably wasn't calling any bet on the flop with 2 overs and an Ace on the board, so I won as much as I could... I hear another guy say "that guy is solid.." and another say, "wow, quad Queens.." I can tell my tight reputation is without question and I put it to good use later on. This is like my 4th time ever hitting Quad Queens. I guess I am lucky with the ladies...

A short time later I get pocket Queens again in the Big Blind. The button raises it $17. The small blind calls. I re-raise to $57 all day. The original raiser calls, the small blind calls. The flop is A23. I think, dam an Ace. I have to bet to win. I pause for a second and think I have to bet if I am going to win. So I bet $50 into a $171 pot. The big blind folds reluctantly and the small blind thinks really hard and folds. The button guys says, "tell me that AJ is no good.." and the small blind said he had a mid pair. He thought I had pocket Aces and my $50 bet was just begging to be called. He knew I was tight and called me the "tightest Asian player in Austin".. Did my bluff work? or did he just have a mid pair also? I guess being the tightest player at the table helps make people fold to you. I was glad to take it down without a fight.

My last big hand: Same exact setup as before... The button raises $17. The small blind calls. I am in the big blind and see two ladies again. I raise another $40 to make it $57 all day. There was one limper already in the pot. He goes all in for around $35. The button guys says, "we have been here before.." I say, "Yes, we have and you should have folded before, will you make the right decision?" He finally folds.. The small blind is upset, he wanted "pot odds" to call. He takes his time and finally folds, showing pocket nines. I roll over my ladies and hit my set on the turn. The guy that went all in never shows his hand, but I assume he had a small pair. He is one of the looses players at the table and I have taken him down many times before.

I just closed my WFC puts. I purchased 500 of them at .85 and now sold them at $4. The stock is down 10% and I decided not to get greedy and take what I could. I think Wells Fargo will probably go under, but you don't want to be a pig in this market. Eventhough the SEC ban shorting of financial stocks, you can still profit from a stock going down by just buying puts. Short all financials!
Posted by Anthony at 10:29 AM 2 comments: